We seem to have a bunch of people out there who think that they are so self-important that they feel the need to get the Washington Redskins to change their name for fear of offending Native Americans.  But the problem is that it’s not the Native Americans who brought up this issue. It’s the people who attended college, or know no actual Native Americans, but believe their keen sense of political correctness requires them to actually care about the name Redskins.  But what’s in a name:

It has been the name for the team for 82 Years and now apparently, some believe that we’ve evolved to the point in which we know that it is now offensive 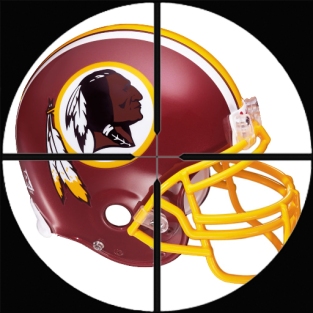 to say.  Even the President had to open his big, fat, politician mouth, to discuss the issue and how he would perhaps think of changing the name because it had a “storied” history.

The Argument has been made by some silly people suggesting that “Red Skin” is the same thing as dropping the N-Bomb.  If you’re one of the people who believes this,  you’re absolutely being childish and ridiculous.  The N-word is in a class all by itself!  Not even the H-word (honky) or the W-word (wetback) are in the realm of a word that was applied to people while they were slaves or right before they were lynched.

I wouldn’t personally call anyone a “Red Skin” just as I wouldn’t call anyone a “Pale Skin”.  That said, I don’t believe that we need to create a law against a name that no one, except some Indian tribes themselves, still use (outside of school mascots).  People should still have the Freedom Of Speech to speak freely — even if that involves dropping the N-Bomb — if they are willing to accept the responsibility for its use.

CNS News noted that they found 62 schools that used the name/mascot “Redskin”.  In its history, a few schools have ceased to use the name “officially” and years later, the students still use it.  Amongst these schools, debate remains in whether the name should return to use.  Other schools have removed their Indian-themed names including: “Redmen”, “Redhawks”, and even “Indians”.  Next, the politically correct types, will go after the names “Braves”, “Reds”, “Browns”, and “Chiefs”.  And then after that, they’ll go after names that vaguely allude to Indian tribes, such as the “Mohawk”, “Blackfoot”, Iroquois”, or “Fighting Sioux”.

The thing about being a Politically Correct ‘Douche, is that it is a circular process that never ends.  Something can ALWAYS be determined to be offensive to someone.  Even if there were only 1 word and that word was Butterfly,  some idiot would find an instance where it was being used offensively.

Be Careful What You Ask For

I know it’s not the Indians (Native Americans) that are making this a big deal, but what is likely to happen with this movement will be based upon the rule of Unintended Consequences.  I predict that as Society PURGES itself of Indian names and other cultural elements of our Indian culture; that over the next 50-100 years, Our American Indian-supportive culture will begin to die away and be relegated to the history books, and it will only be the States, City’s, Army Helicopters, and Casinos that will maintain Indian names.  Unfortunately, history will be white-washed (which is itself probably an offensive term) and future generations will fail to learn the value of Native American culture and we, as a nation, will go from a country where many Americans are proud of, and CLAIM some remote, albeit vague, Native American ancestry, to a country where future Americans aren’t introduced to “Native American history” and don’t see a need in protecting that culture.

But what’s worse is what will happen in 100-150 years, where future politicians, raised with no concept of Indian culture, will begin to question the need for Indian “Reservations” and begin to dismantle the remnants of the Indian Culture.  Obviously, nothing lasts forever, but removing Indian cultural remnants under the auspices of political correctness is both silly and detrimental.

We don’t have a right AGAINST being offended because anyone can find something to be offensive.  As an example:  I’m offended by being referred to as “African-American”.  I’m also offended by the terms “Black Person”, “White Person”, and “Mulatto” (yuck).  I’m also highly offended that we still use racial Check Boxes on government forms if that matters to you.

Should the Redskins change their name?  (…even though I think football is a stupid waste of time) Hells No!  They should actually keep the name because they are free and not hurting anyone else.  Mind Your Own Business!

What's On Your Mind?? Cancel reply